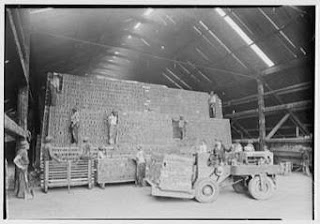 Located in Kingston New York, the Hutton Yards were among the largest brick making facilities on the Hudson River.   Generations of families worked there, and a significant number of buildings in New York City made use of the Hutton Bricks.

Today, the Yards have transformed into a cultural and community facility.   Check out Today's Hutton Brickyards!

From the final chapter, Chapter 7:
EPILOGUE FOR A DEPARTED INDUSTRY
"The Hudson River brick industry went down before an array of overwhelming forces, including large demographic changes, competition by new technologies, and by brickmakers in distant locations that had achieved access to the New York market, as well as new environmental standards. During its lifetime, nothing can gainsay that industry’s indispensable contribution to the very existence of New York City, where the record of that accomplishment is everywhere to be seen. With the exception of IBM, there is nothing comparable to that industry in the Hudson Valley today in terms of size and consequence of its production ....

Soon enough, virtually all vestiges of the physical presence of all that intensive manufacturing activity will have observably disappeared. The great majority of the substantial changes to the landscape, resulting from the excavation operations, will not be discernible due to overgrowth—a condition that is nearing completion at this writing. Development of brickmaking sites for other purposes will also obliterate all signs of past endeavors. Perhaps one of the two graceful nineteenth-century brick boiler flues at East Kingston (the Shultz yard’s flue being a personal favorite), built to power the steam engines that drove the brick machines, will be treasured as the sole remaining industrial artifact of three and one half centuries of the existence of the great Hudson River brick industry."

At the beginning of the twentieth century, brick manufacturing was the dominant industry on the Hudson River. One hundred thirty manufacturers employed seven to eight thousand workers. It was the largest brickmaking region in the world, supplying vast amounts of this most essential building material to the fastest-growing city in the world. Spanning three and a half centuries, this industry ceased to exist in the year 2002. Included here are accounts of technological innovations, manufacturing methods, periods of enormous production, and wrenching business crises that transformed the entire industry. Elements of this history include the arrival of immigrants from Ireland, Italy, Hungary and the American South, as well as labor relations.