Bookstore Magic - a call for experiences

Magic In the Bookshop - and ongoing series

Those of us who work the shelves in used bookstores are often in a place where we experience magic.  The most typical of this occurs when a customer comes in looking for a specific title,  and sadly we don't have it.   But alas, following on said customer's heels is a person selling us that self same title.   It happens enough to be more than random, albeit unpredicatable.

It occurs to me that documenting some of these bookstore enchantments might be both entertaining as well as keeping the potential for magic in the air.

If you are inspired, or have examples of bookstore magic to share, feel free to do so.   We'll be happy to share the experience. 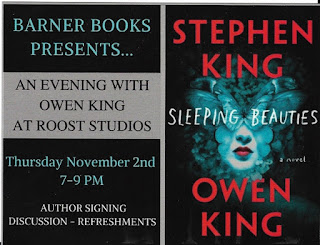 We're looking forward to an evening with Owen King.   Owen and his father Stephen, collaborated and wrote Sleeping Beauties together.

As part of the promotion for the book Owen and Stephen were on Good Morning America.   Owen asked his dad where his best ideas came from, and Stephen replied:

"I used to tell people there's a little used idea shop in New Paltz. . ."   We'd certainly like to think of that as us!

Books/Typewriters - it's all about the magic!

Sometimes it's not just the books!

A customer was in talking to me about typewriters.   His son joined in the conversation, and it turns out that he actually has started a collection of typewriters.  He even shared some Tom Hanks (avid typewriter collector) stories.

It was a fun conversation, but the magic happened when Kevin, our typewriter repair person, stopped by with a couple of typewriters that he had just finished working on.   Kevin's shop is in a nearby town, and we never really know when he's going to show up.  Somehow or other the universe put together the conversation and his visit!

He brought back a vintage Remington that needed attention, and now is a fine working typewriter.

I showed our typewriter aficionados that very typewriter -- and as magic would have it, our two recent additions became one.   The vintage Remington is now off to a new home.   The L. C. Smith Corona shown above is a gem.  Kevin has restored it to near showroom prime!   A unique feature on this machine is the company medallion on the top.  It helps date the machine (along with the serial number) to 1932.

So the the L. C. Smith Corona joins others in the shop -- plenty of magic left in the air!

A customer came in with a variety of art books to sell.  Some catalogs, some books, and a rather interesting assortment.   Among the lot was a French Fold Folio style book of photographs.  The plates were intriguing and definitely showed a unique photographic style.   Typically, even on difficult to figure out books we often have some clue to help us in our pursuit.   Nothing on this one.   As I lamented the issue to the seller, another customer walked by and realized what was going on.
She quickly announced the she could read Cyrillic letters and offered to transliterate.   With those clues, we fairly quickly found out that the Photographer was Sergey Ivanov-Alliluyev, a noted Russian Photographer.   It was only a short matter of time that we had the bibliographic information on the piece and could make a rather informed decision on whether it warranted us purchasing it.