Tiny Books - When America Was Great!


Books take on many forms and sizes.   They even take on multiple purposes.

Today it's a miniature - but one with the only  words being on the cover, but is  a HUGE story of the past, and relevant to our current times.

Here's one from the 50's - THE WOODSTOCK GARAGE. A town with a Famous Name (often referred to as the Most Famous Small Town in the USA)  in Upstate New York -- our Ulster County neighbor.

So What's the Story with this sweet matchbook?

The Ford of the 50's.   I remember it well.  HUGE engines, using lots of cheap gas, and constantly serviced by the many small independent garages that abounded, simply because they broke down ALL THE TIME, The mnemonic for FORD - Fix or Repair Daily - (F.O.R.D.) was quite rightly earned.  Ford wasn't unique, because all the brands and models had problems.   The Corvair (a Chevy) that was remarkable in that it could actually flip over when being driven on a straight away, and was immortalized in Ralph Nader's book "Unsafe at Any Speed." 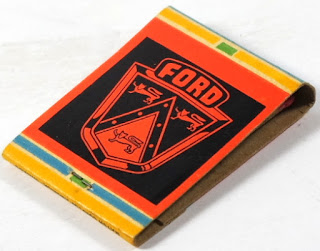 The Ford of that great time had a lifespan of about 30-40,000 miles.   When shopping for a used car you'd think twice about picking one of those because it was going to spend a lot of time off the road and in the shop.  And when it was on the road, the unspoken truth was that if you were in an accident, you would most likely end up in a hospital, and with some degree of predictability, could end up dead.   The cars were designed to appeal to our taste and image but not to our head.

Incredible advertising, free matchbooks, and an economy that was growing post World War II made Ford a lot of money (as well as the other manufacturers) and they knew that they could keep the money machine going by building cars that were designed to FAIL.  The throw-away generation was at its height.   The parts were made in Coal fired plants, where miners ended up getting cancer from the coal dust and and the carbon and other dirt that spewed from the very high chimneys contributed mightily to the demise of our planet.  The paints and chemicals used were dumped randomly into the ground resulting in damage to water systems and land that will last for generations.  Those effects will last far beyond the lifespan of the Ford.

Upstarts that they were, the Japanese entered the market with a different idea.   Build a car that would spend time on the road and not in the shop.   They weren't instant success stories, because after all we believe, "Aren't We Great," and didn't much like the idea of buying cars from another country, particularly one that pissed us off as much as Japan did.   Americans wanted to buy American goods, but soon realized that those homegrown goods simply weren't as great as they thought and the hype suggested.

We learned a very simple lesson of the time:   Others made cars better than America.  They were safer, more economical to buy, and far easier to maintain.   When you went to trade it in, they were worth more, because they still had plenty of life left.  70,000 miles, which was junk yard time for the American behemoths, was the Japanese car becoming broken in.   This fact wasn't about American workers being great or not, it was about American Corporate arrogance, and reluctance to change.

It took a long time for our American Made Car Companies to realize that what they had been selling wasn't really what people wanted.   Several manufacturers failed, and ultimately Federal Funds were used to try to keep others afloat and improve.

During the time that "we were great" there weren't a lot of rules.   Cars were death traps.  They worked really well for the Company that manufactured them, but not so much for the people who bought and drove them.   The cars consumed a huge amount of fuel to operate.  When America was great, the government didn't mess with businesses as the basic rule  adhered to was "Buyer Beware."   When "America Was Great" the consumer was only one part of the business equation -- and actually not a particularly fundamental part.


Inside the book are matches.   They were given out readily to people because most adults smoked.  In this case, when you struck a match to light your cigarette you would also be reminded that it was time to get a new Ford.

In the 50's the Cigarette Manufacturers did everything they could do to provide attractive cigarettes, create and fulfill the huge demand for products.  They developed products to fulfill a quest for varied image.   Were you a Virginia Slim or the Marlboro Man?   Did we identify with Salem Lights, or  Camels?   So many choices to be made!

Santa Claus delivered Cigarettes at Christmas time and our Movie ,TV stars and shows were filled with smoke, gentile, elegant or tough.   Kids were introduced to them by their parents.  Some kids even got to have training cigarettes, the candy that was marketed and sold which looked just like the grown up model.    Cigarettes were advertised everywhere, and right at every checkout counter in the country, including pharmacies.   Smokers were treated with complete equality--they could smoke anywhere and at anytime.  Those who didn't smoke--well they would just have to suck it up.

America was great then.   People could buy what they wanted and companies could do whatever they wanted to do to promote their goods.

Ultimately we started to pay a little more attention to the fact that hospitals were filled with coughing people, that our lungs couldn't handle the smoke, and that our relatives, friends, loved ones, and even children were becoming sick and dying because of smoking.  America was great then.  Company's could make lots of money by selling and promoting products that would actually kill the customer.

When "America Was Great" our government didn't interfere with our right to be sick and didn't do anything to protect the public from itself.   Our government was reluctant to get involved.   It seemed that the Government believed  the Cigarette manufacturers who stated that all was fine and they best not interfere, and that the worst case scenario, so the Cigarette Company's research showed, was that there MAY be some health risk. 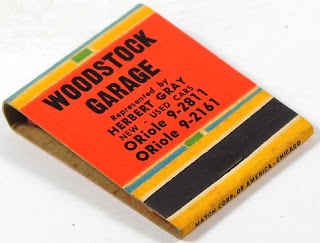 Seems that when someone says "Let's Make America Great Again," that it might pay to read the book.  It doesn't take long to go through it.