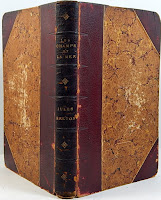 His work is on display in museums around the world.  But our Breton experience relates to one of the books that he wrote: 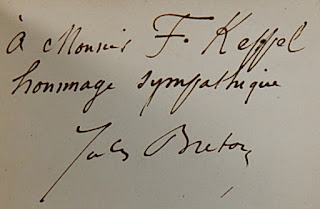 Breton had inscribed this copy to a Frederick Keppel.   Keppel, the inscribee, was the First President of the Carneige Corporation in New York City which ultimately helped finance many public libaries around the country.  Keppel also served as a dean of Columbia University. 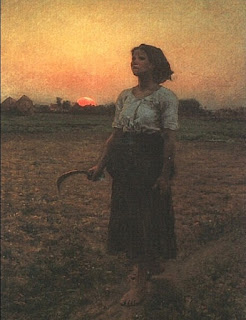 The reach of an artist/writer can go deep and broad.
In reading about Breton it appears that Bill Murray was so moved by Beton's painting, "Song of the Lark," that he viewed at the Brooklyn Musuem that it inspired him to drop his suicidal thoughts. (as told at a press conference for "The Monuments Men.")   In a strange and frequently occuring bookstore coincidence, the same day that Breton's book arrived at our shop, a biography of Bill Murray did too.

Breton's influence was, and still remains significant.   Van Gogh walked 85 miles to see him (but apparently turned around when the wall at Breton's home seemed too daunting).   There's magic in those images and words!

The book is available at our shop for sale, or can be purchased online (Click Here to view the offer)


Posted by Barner Books - Store at 5:31 PM No comments: Links to this post