American journalist and author, Hunter S. Thompson is infamous for his writing style and the creation of Gonzo Journalism. Thompson is also well known for his books including the Rum Diary(1998), Fear and Loathing in Las Vegas (1971) and Fear and Loathing on the Campaign Trail '72 (1973). Aside from his work, however, Thompson's risky lifestyle of heavy drug and alcohol use also brought about much attention. 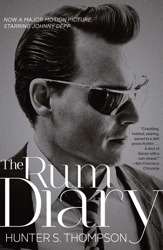 Here at Barner Books we honor the late Hunter Thompson by carrying his best works, and one of his most recent favorites. We are stocked with copies of The Rum Diary, which is soon coming to theaters October 28th staring Johnny Depp.
Posted by Barner Books - Store at 2:19 PM