Lewis Carroll, the mathematician creator of Alice In Wonderland loved the concept of chess - and it's no wonder that it had such great play in the stories.

We ran into this beautiful chess set and now have it available. Alice In Wonderland Chess SetHandmade by the Crftsmen of Studio Anne Carlton (Hull England)Condition:  NEW  Notation:  Does not include boardBeautiful chess set is based on characters by Lewis Carroll in his two famous stories, "Alice's Adventures in Wonderland," and "Through the Looking Glass."  The set has the pieces presented as following 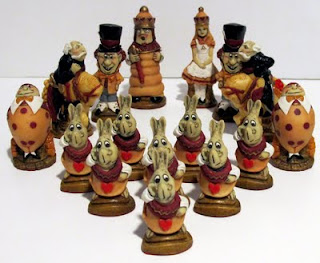 Set is new and perfect.  Comes in display panels and is boxed.  The box shows some corner bumping. 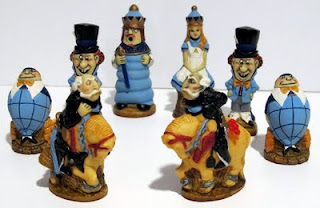 Fridays always have seemed to take on special meaning. Most pronounced in my experience were the many years spent at Jewish Camps. Every Friday became a study in constant motion. As a camp director at liberal Jewish camps I felt the need to whip up a frenzy of cleaning spirit and preparation for Shabbat (which begins at Sunset on Friday). Most of the kids, and virtually all the staff were much mellower and were delighted to spend their time showering and picking out their clothes.

Fridays in a bookstore are a little different.
Sure, it's the end of the regular week and with it come whatever plans and preparations we're making for the weekend, but there isn't a frenzied pace. Actually, bookstores usually aren't known for ever having a frenzied pace. But here, at Barner Books, it takes on another quality.
For the past 3 years, from July until late August, Fridays at Barner's have been punctuated by a visit from Hasids who summer at a nearby camp. They started coming to the store to see if there was anyone who was Jewish. They've come back virtually every seasonal Friday since.
When here they want me to have the Mitzvot of putting on the T'fellin. The only times that I have done this ancient ritual as an adult is in the presence of Hasids. They make a point of stopping people on the streets of New York and other population centers and asking them to do this.
It reminds me of my youth. My family, like so many others of our generation, went to an Orthodox Synagogue. Ours was actually led by a Rabbi who was the head of his own Chasidic Dynasty. That was an interesting histo/sociological time in that so many of the members of Orthodox Synagogues were quite liberal in their practice. Today, there are few, if any Jews who are liberal in their practice who are a part of Orthodoxy. But the place my family and so many others of the time went to “practice” their Judaism was Orthodox. That continues to play itself out in Israel where the vast majority of the country's Jews see themselves as secular, but when it comes to religious issues they look to the Orthodox.
Hasids are a fascinating group. Their leader died some years back and many hold to the belief that he was the messiah, or perhaps a person who would walk side by side with the Messiah. Rabbi Schneerson, their leader, was saved from the Nazis by his followers and settled in Crown Heights NY. There the movement flourished under his leadership. He was known as a sweet soul who was worldly in his out look and wanted to bring people into a more traditional practice of Judaism, from where they were at. The people that stop by our shop are among his disciples. They have a fervor and dedication to the practice. To be a Hasid is to live in a very tightly knit community, and to make ones life there.
We frequently get into conversations about theological issues: “Is there a Messiah?” They of course say yes, I say nope. Will the Temple in Jerusalem be rebuilt – again, they say yes, and I'm consistent too. What portion will be read this week – they tell me and give me a quick overview. They take issue with so much of what I believe as a liberal Jew that it sometimes makes me feel awkward. But they are the ones reaching out.
They are hard nosed about their beliefs and soft on their sales technique. Their worldly view is a narrow one. Much of it is prescribed by their interpretation of the laws in Torah (such as putting on T'fillin), and more is significantly influenced by the nature of the community that they form and live amongst.
While I sense that I am some worlds apart from them, their visits serve as a reminder of something larger than the world in which I live. Ironically enough, every week they serve as a reminder that the world is much bigger than we know.
Posted by David Friedman at 5:39 PM No comments:

We were thrilled to see the article that lists us as one of the recommended stops in New Paltz.
We're here and ready!   It's a nice drive from the city and we're glad to be one of the finds.

Posted by David Friedman at 2:17 PM No comments: