INTERSTITIAL PIXELS
The Art of Questioning Perception
I cannot begin to recall how many times I’ve crossed New York State on I-90. From Batavia, where I grew up, to Albany where I studied, or passing Erie & to the Iron City of Pittsburgh, my last home before moving to the Hudson Valley. But, it is wrong to say that I “crossed” the state on this road, since this is one of those highways that unfolds before a traveler, magnetically pulling bodies forth like an undertow & opening up into ever wider expanses. Where I-90 passes Albany, the earth rests quietly in a patch of flatlands that span the triangular gap between the rising Catskills to the south, the Berkshires to the east & the Adirondacks to the north. Space there, in this sense, opens in a westward direction. 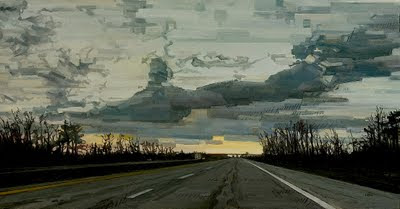 For the past five years, Luke Williamson has painted the I-90 landscape in a series that delivers the unraveling feeling a traveler of those parts will know in his bones as he pushes west past Schenectady, Utica, Syracuse, & into the Genesee Valley, my own stomping ground & gateway to the Great Lakes. This upstate / central / western region is an elongated glacial depression defined by a southeastern jet-stream that acts as a constant reminder of the ancient ice’s slow & atrocious trajectory. Straying from the traditional flock of Hudson Valley painters, Williamson has refrained from plucking that pristine chord to play the natural-ized Music of the Spheres; although, his technical dexterity in other landscapes, namely those on his website, does show his decision to work through rather than around the tradition.
What sets Williamson’s painting apart is the way it highlights the very modality in which it represents a landscape. It surpasses the notion of the landscape as secret-keeper, an object-in-itself, in order to explore the relationship between the landscape & the perception that opens up toward it. It is at once self-reflective & critical of visual art in the new millennium. I must add, the fact that this article on Williamson’s painting is being distributed via RSS & contains digital reproductions of his oil on canvass reinforces the relevance of his argument & makes these words the perfect target for his critique.
The closer we look at the clouds in Williamson’s painting, the more we notice that they are pixelated & from those nebulous bodies disintegrate into nearly abstract shapes. At their apogee, they are nothing more than chromatic quadrilaterals. Such is the sky in the eyes of this artist: bricks of color. This pixelated atmosphere denies the viewer the luxury of forgetting that what lies before us is a representation of the landscape & not the landscape itself. It is as much about the landscape as it is about the painter’s perception of it. Williamson’s painting says to me, “Do you remember this field?” I say “Yes, I remember.” Again, it asks, “Do you see what I’m talking about”. Again, I reply, “Yes, I see”. Then, in a dry voice, it poses one final question: “What did you do to see it?”

As we zoom in & focus on the center of the painting, the highway serves an an easy metaphor for life. The old trope of “the road of life” is refreshing at times like these when artists expend so much effort trying to create something new & shocking, instead of striking that human tone that reminds us that the problems of our day – as opposed to their solutions – are distributed equally across demographics. This is why existence here is depicted as lateral movement. Glowing brighter than the tumultuous & present clouds overhead, the horizon points to the future we reach for each time we remember where we have come from. The pixelation of the clouds that emerge between the viewer & the horizon (that future, that ever present & ever absent imminence) gestures at the complexity demanded by looking at the future & at a painted landscape in an age dominated by hyper-realistic imagery.
Williamson’s painting puts in question the tools we use to look at art &, in this sense, his work goes beyond, say, the photography of Steve Jordan, because while the latter seeks to present a more-than-real image of the landscape, the former presents a slightly abstract landscape all the while asking what place photography has in our perception of reality. As a response to that contemporary propensity to liken a realistic visual representation of reality to the realism of photography, Williamson’s 90 West fragments its subject matter into the most basic, chromatic, geometrical shapes. Between the present & the future cubes of light linger. Between the viewer & the work of art stands the medium in defiance. “This is not a landscape,” says Williamson’s painting in a subdued voice, “it is how a landscape is perceived.”
Joseph Mulligan
New Paltz, New York
I
Posted by Barner Books - Store at 1:17 PM