THE EYE OF THE CYCLOPS
The Raumportraits of Menno Aden 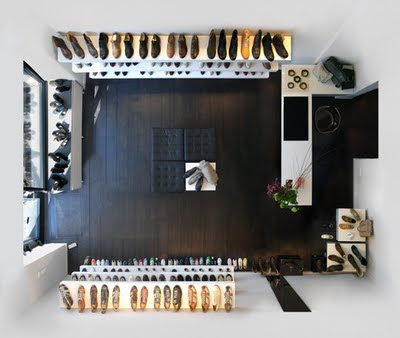 Menno Aden has carried out aerial surveillance in Berlin. Cautiously & silently, he has positioned himself on the ceiling of 30 rooms in order to capture the imagery of everyday life. Now a shoe store, now a dentist’s office, now a storage closet, now a bedroom. He has obtained certain data that may contain clues for the detective work that his photo art requires of its viewers. His Raumportraits / Room Portraits harness the early 20th century technique of montage & direct it at the expression of “more than just rooms,” as Karen Helmsteidt has suggested, “but intimate scenes of life lived” – scenes that, let us add, depict human life without visually representing the body (1).
“At first the mostly deserted spaces and rooms look like scale models. Only after a closer look does one realize that the rooms are real,” remarks Uwe Goldenstein. This “impossible perspective”, moreover, is attained by attaching the camera to a monopod, hoisting the monopod to the hight of the ceiling & taking 100-150 images from multiple angles while stabilizing the camera at different points on an invisible grid. The images are then montaged until each pixel lines up flush with the next, giving the impression that only one photograph was ever taken & the feeling that the Eye of the Beholder is located precisely above each & ever inch of these human habitats.
The other night, after looking through Menno Aden’s Room Portraits for several hours, thinking about what they mean to say, wondering if they mean what they say, I fell into a restless sleep. Then, in the strangest dream, Menno Aden appeared to me as a Cyclops. A grotesque monster of gargantuan proportions. Yet, one that did not possess the fury that traditionally characterizes such beasts. No. This was a curious Cyclops who, on account of his great size, was only able to observe human life at his feet by removing his only eye from its socket & extending it downward in his hand. He directed that oversized eyeball, coated in saline secretions, at the house across the street from where I was standing – a house almost identical to all the others in the neighborhood. & suddenly a woman ran out of that house, shouting & shaking a cast-iron skillet: "Hey you! Up there! Hey, down here! At this house visitors enter through the front door!" I awoke in a sweat to the cackling of jackhammers.
In a video interview with The Deutsche Welle, the German artist explains the dual nature of his Raumportraits: “One the one hand, these are portraits of rooms; and on other other, they’re portraits of the individuals who live in them, even though you don’t actually see them. So the viewer can play detective, collect clues and figure out what kind of a person that is." & in that same interview we also learn about his technique: “what I want are lots of small individual shots which I can piece together like a puzzle... It never fails to surprise me. I always think ahead about what it will look like [when] seen from above, but somehow it always turns out to be completely different, or not necessarily completely different, but not what I was expecting.”
The view from above, Aden's downward gaze, gives rise to the notion of a divine perspective, a humanly impossible perspective. Hence, the apotheosis of the voyeur: "Aden's top view suggests God having an eye on private spaces. This omniscient [sic] point of view reduces the autonomy of 'my home is my castle' – the sketch of our personal way of life – to a provocative matter-of-fact level that immediately reveals private systems of order. The association of the ubiquitous observation camera is only too obvious.” & this, says Goldenstein, is what allows us to see these portraits as “secret retreats” that are “realistic and abstract at the same time” (3).
Tonight, as I sit here next to my bubbling aquarium & notice that the things in this room seem to make faces at me each time I look away from them, I cannot help but wonder if Aden's Room Portraits manage to let each portrayed object speak for itself without being asked or obliged to? I throw this question against a wall & catch it on the rebound. If everyone in the world all at once were to go on a secret retreat, would it still be secret? Would there be anywhere to retreat to? Anywhere to escape from? Coiling silences ensnare my thoughts & a sudden feeling of dread fills my lungs with more air than they can hold. I am being watched! Menno Aden! The Cyclops! No. It's just the neighbors. So I sit back down alongside my bubbling aquarium, drop some flakes into the water, & as the fish surface to feed, I get a profound urge to look those fish of mine square in their big round eyes.
Joseph Mulligan
New Paltz, NY 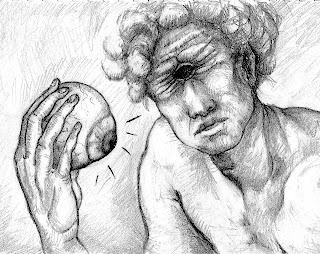 NOTES:
*Illustration by Beatriz Sosa, The Cyclops and His Eye, 2011, graphite on paper.
(1) His recent exhibitions include the Solo Show, "Spurensuche" at Galerie Lesmeister in Regensburg (2011); "AAF" at Galerie Lesmeister in Milan (2011); "Stand der Dinge", with Juliane Eirich, Gudrun Kemsa et al. at Galerie Schuster Photo in Berlin (2011); "ArtFair 21" at Galerie Schuster in Cologne (2010); "Volta6 Show" at Deák Erika Galéria in Basel (2010); "Contemporary Art Ruhr" at Galerie ArtAffair in Essen (2010); the Solo Show "Raumportraits" at Galerie Schuster Photo in Berlin (2010); "RaumFormen" at Galerie ArtAffair in Regensburg (2010); “The Universe is not your Friend, Babe”, with Steffi Stangl and Jessica Buhlmann at Deák Erika Galéria in Budapest; "New Homeland" at Kasseler Architekturzentrum im Kulturbahnhof in Kassel (2010); “Urban Life” at PopUp195 Photogalerie in Berlin (2010).
(2) The “Shoe Shop”, which we reproduce above with the artist’s permission, calls to mind Van Gough’s renown Shoes, in that both portray human beings in material terms of labor.
(3) See Uwe Goldenstein's commentary & all of Menno Adens Room Portraits at http://menno-aden.de/room_portraits.html
Posted by David Friedman at 9:01 AM