FIRE & WATER IN CONTEMPORARY JAZZ
Marvin Smith is all head & feet. This masterful jazz drummer, a Mid-Hudson resident for the last 10 years, a man who goes by the name of BuGaLu, is that ole cantankerous cat you’ll hear trash-talking lethargic wannabes to the hammers of his understudies’ ears at taverns teeming with chance. One day, a number of years ago, a young musician had lit his fuse, & hurling caution to tornadoes, Marvin was spitting out sparks in a pool of gasoline. “Them cats be livin’ in Candyland, man!...” he shouted at me, adding “they think they all that when they can’t play their way outta’ paper bag...” 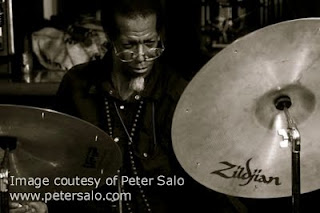 NOTES:
(1) It was during his time in Italy that he also began his friendship with Max Roach. “Larry, Karl, & I were at the Duomo & we saw this black cat across the street. I said, ‘that cat looks a lot like Max man’ & it was. Max didn’t know where to go to eat & enjoy his time in Rome so BuGaLu showed him around & a great friendship began. “Max bought us all dinner that day.” For more on this, see the interview with Piero Borri.
(2) The band included Santi Debriano on Bass & Kenny Werner on Piano. Their Album “Down Home New York“ won album of the year, 1984, in Downbeat magazine.
(3) The best way to stay up on performances is through the musician’s Facebook Account, which is updated regularly with news, show listings, jam sessions & as many video clips as one could ask for.
Posted by Barner Books - Store at 4:08 PM