The Ashokan Reservoir is one of the water supply sources for New York City.  During the later 1800's and early 1900's the City of New York claimed imminent domain on various towns in the Catskill Mountain area to form the reservoir system.   It is an engineering marvel - with an extensive system of dams, tunnels and aqueducts that take the water from the Catskills about 100 miles south to the City.
This photograph was made from a digitally remastered original to give the "psychedelic" look, which also is representative of this historic area.
The card is available in the shop for $1.00 or order it online with shipping paid at $1.50. 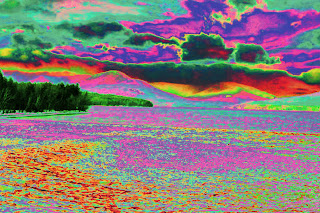 Click the image or the title to order this postcard
Posted by Barner Books - Store at 11:26 AM