Edmund Hillary was arguably the greatest mountaineer of the 20th Century.   He led the party that was first to climb Everest, had a long and distinguished career as a climber, and ultimately was knighted.
His autobiography "Nothing Venture, Nothing Win" is a somewhat scarce title particularly when it is inscribed by Hillary (as ours is).   It joins a collection of books that recount his adventures that we currently have in stock. 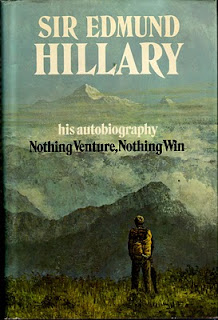 Click here or on the title for further information about the book
Posted by David Friedman at 3:30 PM